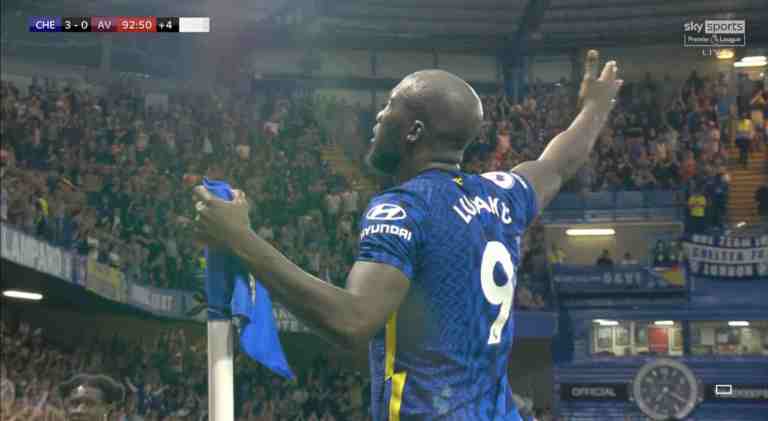 The Belgian had Kovacic to thank for superbly setting him away in the 15th minute with a pass that cut through the Villa midfield, but then it was all about a striker at the very top of his game.

Despite the fact Axel Tuanzebe came across to cover, Lukaku never looked like doing anything but scoring and he checked inside the defender before shooting past Villa goalkeeper Jed Steer.

Just as the United fans had arrived at Old Trafford desperate to see Ronaldo get on the scoresheet, the Chelsea supporters had been desperate to see Lukaku hit the back of the net and Stamford Bridge erupted when he did

He saved his second goal until time added on for stoppages and sent the Chelsea fans home happy that their number nine will be more than a match for United’s famous number seven.

Romelu Lukaku is back at Chelsea, and he’s wasted no time in getting back among the goals.

The forward bagged one against Arsenal two weeks ago, and then stepped up to score a brace today

His second came in added time when Cesar Azpilicueta picked him out on the counter attack. Lukaku didn’t mess around – he never does. He took a touch and belted it home for his second of the day.

That left foot is something special, and we’ve got the feeling we’re going to see plenty more rocket shots going in off it this season – and hopefully for years to come.

It all came from a brilliant Kovacic assist too, with the Croatian sliding between two midfielders and firing a perfect pass into the Belgian’s path.

It’s a well deserved goal, and we can hopefully add another to make our lead unassailable.

add another to make our lead unassailable.

Meanwhile, Edouard Mendy made three brilliant save as half-time ended 1-0.

Check out Edward Mendy’s Position on The Clean Sheet Chart After A Sensational Display Against Aston Villa..