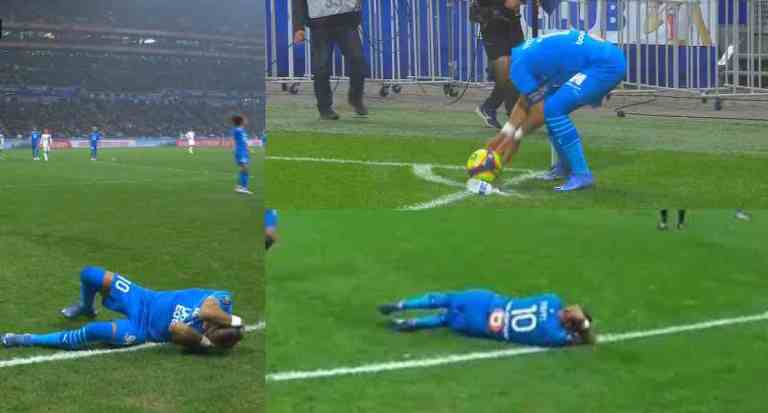 The Ligue 1 match between Lyon and Marseilleat the Groupama Stadium has been suspended after a fan threw a full bottle of water at Dimitri Payet.

The Marseille playmaker was preparing to take a corner at the end where the Lyon ultras stand when he had the bottle of water hit the left side of his face.

Dimitri Payet had received a bottle on the head thrown from the stands. #OLOMpic.twitter.com/VxAQttlV6Y

Payet soon fell to the ground and, aware of what had just happened, Lyon goalkeeper Anthony Lopes and midfielder Houssem Aouarbegan to plead with the supporters not to do anything else.

The Marseille players immediately surrounded Payet before some Lyon players then did so.

The referee told the players to retreat to the dressing room while Payet receives medical attention, having undergone a concussion test out on the pitch.

It has not been confirmed whether the match will resume or be completely suspended.

Back in August, Payet was involved in an incident against Nice that saw him throw a bottle back into the end where the Nice ultras stand after they had thrown it towards him.

That resulted in a surge of supporters onto the pitch, with the match being suspended. The rescheduled match between Nice and Marseilleended up finishing 1-1

Like Loading...
Related Topics:Update: Lyon vs Marseille suspended after Dimitri Payet hit by bottle Water #OLOM
Up Next

Breaking: Lyon suspended As Fans Interrupted their Match Against Marseille