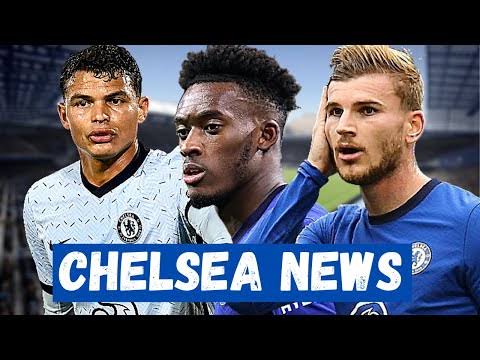 Chelsea would be locking horns together with Liverpool at Anfield on Thursday, 9:15pm in the evening to be specific. As, the both Premier League giants would be back to their remaining fixtures for this campaign. Undoubtedly, both Chelsea and Liverpool are struggling to make it to the top-4 in the league table. And, their clash in this mid-week is more like a heavyweight. Because, they are going to rough and tough on each other. Meanwhile, Chelsea have received a massive boost ahead of their clash against, the Jurgen Klopp’s men on Thursday. And, they have gotten enough standard squad to comfortably silence the Reds at Anfield. Chelsea’s Thiago Silva and Callum Hudson-Odoi are back in training, as they were pictured at Cobham this afternoon during the training session. Obviously, it’s indeed a huge boost for Chelsea, because the Brazilian has been sidelined for a long time due to injury problems, and the Englishman was injured against Manchester united on Sunday when he was subbed off in the beginning of the second half. However, the two ballers are now back to training, and they have given Chelsea’s full squad to attack Liverpool on Thursday. Definitely, Thomas Tuchel have got full squad ahead of their heavyweight against the Jurgen Klopp’s men at Anfield. As, with Silva and Hudson-Odoi back to training, no Chelsea’s player is injured at the moment. Because, the likes of Kai Havertz, Hakim Ziyech and Christian Pulisic are already match fitted. Almost all Chelsea’s have been celebrating and jubilating, because it’s indeed a massive boost for them to have Thiago Silva back to training. The Blues gaffer may choose to start or rest them against Liverpool. However, the good news is that the Thomas Tuchel’s men have got full squad ahead of Anfield show on Thursday. It’s now left to Thomas Tuchel to bench either Azpilicueta or Rudiger for the Brazilian against Liverpool. Because, Andreas Christensen has been balling amazingly and flawlessly, as the Blues boss is enjoying or feeling his amazing form. Thus, as Thiago Silva is back to training, one of the three-men defense would have to go down for him in the squad or better still, Tuchel might choose to go back to four-men defense setup. In a nutshell, Chelsea have received a massive boost ahead of their clash against Liverpool on Thursday, as Thiago Silva and Callum Hudson-Odoi are back to training this afternoon.

Can Silva and Hudson-Odoi help Chelsea to bag 3 points against Liverpool?

Related Topics:Tuchel Reveals plans to Dislodge Liverpool on Thursday As Thiago Silva and Hudson Odoi Trained Today.
Up Next