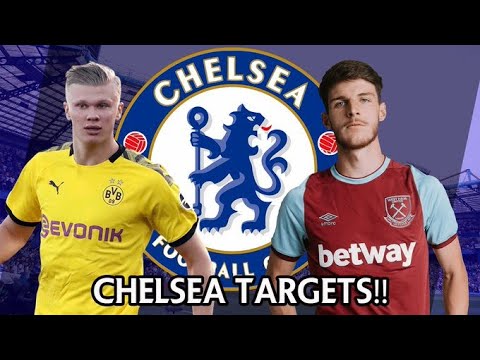 According to popular Football journalist Angelo Mangiante who’s respected for delivering Chelsea transfer news over the years, he has leaked the club’s next transfer targets.

Recalled that Chelsea FC added seven major signings to their first during the last transfer window which includes Ben Chilwell, Kai Havertz, Hakim Ziyech, Thiago Silva, Edouard Mendy, and Malang Sarr and as it stands their spending spree might still continues next year particularly in the summer transfer window.

The following are Potential outgoings: The 20-year-old Braut Haaland who was born in Leeds, United Kingdom is currently having a contract with Dortmund Which runs through to 2024 and his market value is about €111m which is likely to be reduced if truly chelsea FC are ready. The Norwegian has scored 17 goals and contributed 3 assist in 14 games so far this season. While for Declan Rice no doubt that Chelsea are actively in the race to land him and he would love to be part of what Lampard is building as well as reuniting with his good friend Mason Mount. He’s currently valued at €55m but Chelsea will possibly be Willing to sign him at a lower price.

Therefore does Chelsea needs both Rice and Haaland?

Like Loading...
Related Topics:Declan Rice Move Near CompletionTransfer Latest: Chelsea Ready to Trigger the Release Clause of Dutmund Versatile Striker in January
Up Next

Chelsea on the brink of Signing Dutmund Striker in January.