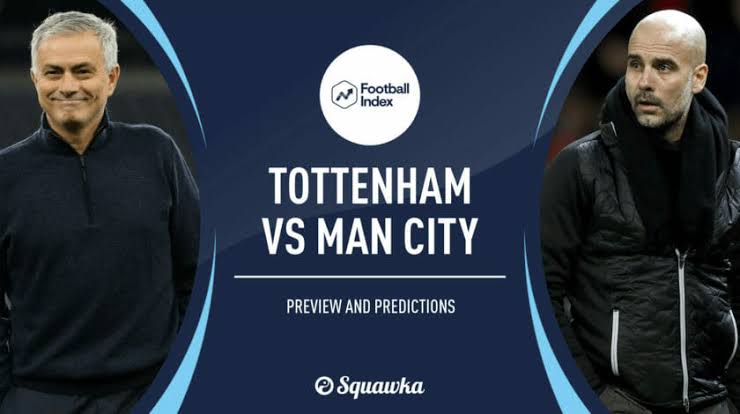 Jose Mourinho has been a close rival to Pep Guardiola in La liga and in premier league as both are World class Coach with loads of experience.

Tottenham Hotspur can go top of the Premier League table for a short time at least with a victory over Manchester City on Saturday (5:30 PM, UK time).

The Lilywhites are unbeaten in their last seven league games since losing their opener 1-0 to Everton, winning five and drawing two in a run which has seen them climb to second, just one point adrift of leaders Leicester City.

Only Chelsea (20) have scored more goals than Spurs so far (19) with Harry Kane and Heung-son Min combining to form the deadliest partnership in the English top flight right now. If Jose Mourinho can get his defensive balance right, there’s no telling how much success Spurs could enjoy this season.

Man City will be a stern test of Spurs’ credentials, however. Despite being 10th with only 12 points from seven games so far, Pep Guardiola’s men have only lost once during that time and hold the joint-best defensive record in the Premier League having conceded just nine goals.

Bizarrely, it’s in the final third where Guardiola has struggled to find a balance, with City only managing 10 Premier League goals thus far. That being said, even with Sergio Aguero sidelined, the Citizens still have a terrifying amount of firepower in the likes of Gabriel Jesus, Kevin De Bruyne and Co.

Even without all the talent out on the pitch, there is always the tantalising prospect of Mourinho and Guardiola resuming what is arguably the biggest managerial rivalry the Premier League has seen since Sir Alex Ferguson vs Arsene Wenger.

WHERE TO WATCH TOTTENHAM VS MAN CITY ON TV:

WHERE TO LIVE STREAM TOTTENHAM VS MAN CITY:

Oleksandr Zinchenko has joined Sergio Aguero and Fernandinho on the injury list while Raheem Sterling and Nathan Ake both picked up knocks while on international duty and could miss out here. Benjamin Mendy’s fitness is also touch and go.

Tottenham: Just when it felt like he’d hit his peak, Harry Kane has elevated his game to a whole new level at the start of the 2020/21 campaign. The England international has opened the season with seven goals from eight Premier League games and, even more impressively, has provided at least three more assists (8) than any other player in the English top-flight so far. Once again, Kane has adapted his game, dropping deeper to become as much of a creative influence as a goalscoring one. It’s a move which has also seen him set up no fewer than seven goals for his partner crime, Son Heung-min.

“I think it started with the relationship that they have,” Mourinho said of Kane and Son’s partnership recently. “They are good friends, they like to play on each other. They just want to win and to perform, there is no space for jealousy.

“Sonny is a very fast player, likes to attack spaces, and Harry is amazing with the ball and when he drops back, he is a player with high quality.”

Man City: David Silva may be gone, Aguero on the sidelines and Sterling a fitness doubt, but that doesn’t mean Guardiola is short of creative options against Spurs. In fact, you could argue that Kevin De Bruyne will make up for each of those aforementioned absences on his own, should he hit top form. The 29-year-old grabbed a goal and an assist during Belgium’s 4-2 win over Denmark recently as the Red Devils qualified for the Uefa Nations League finals and while he’s without a domestic goal since September, De Bruyne did sign off with six assists in his final four club games before joining up with Roberto Martinez’s squad. Despite their form, Spurs have shown defensive weakness at times this season and De Bruyne is the perfect man to exploit any gaps.

can go top of the Premier League table for a short time at least with a victory over Manchester City on Saturday (5:30 PM, UK time).

Thelivesoccer. com from experience see this two big personality to display their wealth of experience in the field of play today between Tottenham and Manchester City.

How Newcastle and Chelsea will face each other in the week Nine Premiership.

How Aubameyang played 90 minutes without a shot, Lacazette hardly touch the ball.