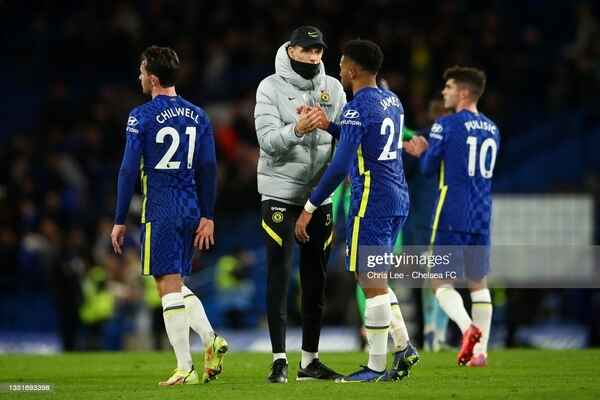 Chelsea will play host to Manchester United at Stamford Bridge later today as they strife to extend their lead at the Submit of the Premier League.

Tuchel will deploy his secret weapon today at Stamford Bridge. He has specifically tutor Christian Pulisic and Reece James to tomment United defence.

He also task Antonio Rudiger and Christiansen to  hold the defense tight. Blues have been superb in recent matches. They have become the club with the most cleansheets this season, having conceded only four goals while maintaining a total of nine cleansheets.

They faced top-tier competition from the likes of Liverpool, Manchester City, and Arsenal and recorded only a single defeat from these clubs.

Today, they will confront Manchester United, which boasts a number of good players, including Cristiano Ronaldo.

The Portuguese made a return to the Old Trafford this season, and has been in superb form despite age. He has also played a significant role in Manchester United’s qualification for the round of 16 stage of the Champions League this season.

Ronaldo would be hoping to extend his form when they face Chelsea today. However, Rudiger, on the other hand, is one Chelsea player who has the potential to silence him. This season, the German defender has been in outstanding form, denying top scorers like as Aubameyang and Salah the opportunity to score goals. One of the main reasons Chelsea’s defense has been so solid throughout this season is because of his presence.

Cristiano Ronaldo will have his work cut out for him today by Antonio Rudiger if he is going to get past the Chelsea defense.

Like Loading...
Related Topics:Thomas Tuchel reveals His Secret Weapon to Cautiously Silence Man United in Today's EPL Game.
Up Next

FIFA Club World Cup 2021: Where to Watch the Draw, Date and Venue as Chelsea Fears No One..

Petr Cech React to Manchester United Playing Chelsea With a New Manager Ahead of Sunday Game. See His Reactions