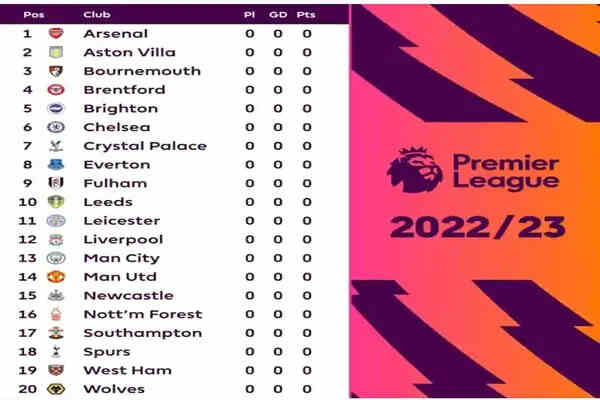 The English Premier League has officially revised their league table for the next 2022/2023 season, only one week before they plan to formally reveal the fixture list. Because of our journey to Qatar for the 2022 World Cup in the middle of the season, the next season will begin earlier than it normally would. The first day of the season will be August 6th.

The players are presently enjoying a break of almost three months and a half. Those who are competing in international matches while representing their country are still involved. Beginning on July 8 will be the beginning of preseason training and matches.

Following the beginning of the season on August 6th, it will conclude on the weekend of November 12th and 13th, just in time for the World Cup. The World Cup will be held in Qatar, and players will go there to represent their country. The World Cup in 2022 is scheduled to take place from the 21st of November to the 18th of December. After that, the action in the Premier League will pick back up on Boxing Day (December 26).

After that moment, games will continue to be played up to May 28, 2023, when the season will officially come to a close. On Thursday, June 16, 2022, the Premier League schedules for the 2022-2023 season will be made available to the public. Fulham, AFC Bournemouth, and Nottingham Forest are the new teams in the Premier League after being promoted from the Championship. They took the places of Norwich, Watford, and Burnley, who were sent down to the Championship.

Like Loading...
Related Topics:The Official Start Day Of EPL 2022/23 Season And Official Release Of The Fixtures
Up Next

How Chelsea Could Lineup With The Signing Of Neymar, Kounde, and Kimpembe Next Season