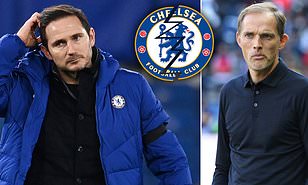 Reports claim the Blues are also set to path ways with Frank Lampard, just after the FA Cup win over Luton town, and are expected to make an announcement later today. Lampard, was appointed as Chelsea head coach in July 2019,, and finished in the top four and reached FA Cup final in his first season as Blues boss. However the recent form of Chelsea has been worrying for the fans and owner Roman Abrahamovic, who has now decided to go for a more experienced manager like Tuchel. Chelsea are currently ninth on the Premier League log after 19 games, 11 points behind leaders Manchester United and five points off Liverpool in fourth. Blues owner Roman Abrahamovic backed Lampard last summer transfer window spending more than £200m on seven new signings including big money deal for Kai Havertz and Timo Werner, who have failed to deliver since arriving at the club. Chelsea had a good start to the season, with Frank Lampard’s side on a good run of 17 games unbeaten run in all competition, but since the middle of December the London club have been off form losing to Everton, Wolves, Arsenal and Leicester.