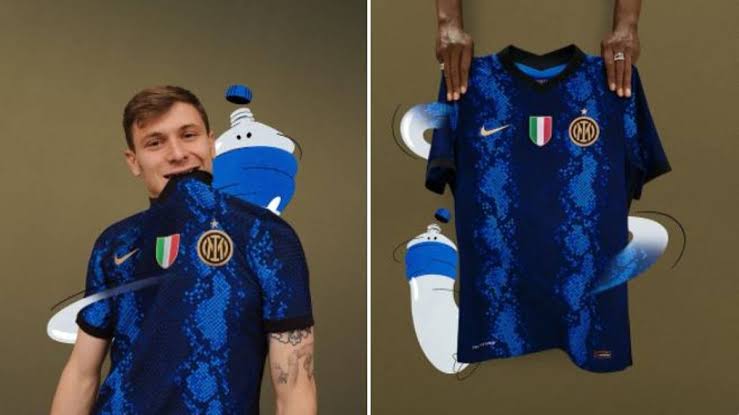 Fans of Inter all over the world will be happy to see Photos of the new kits for home and away for 2021/22 Season.

We’re received photos of the Inter Milan Home and Away kit 21/22 and have updated the article accordingly to include it below.

Now I’ve given Nike a bit of grief for their jersey designs so far, but I have to say, the brand from Oregon has absolutely knocked it out of the park for this one.

As the fashion capital of Italy, Inter Milan’s kits have tended to weigh more heavily on the stunning side of the scale (pun intended), even with their more outrageous designs.

Featuring a gorgeous snake skin design typically associated with luxury bags, and combined with black and gold accents, the Inter 21/22 is an early contender for jersey of the season. The snake motif takes inspiration from the Biscione, a historic symbol of the city of Milan.

Nike has always been adept at weaving in the Pirelli logo into the kit, but unfortunately, with Inter’s longstanding partnership with Pirelli having come to an end, it’ll be interesting to see how the new sponsor logo ties into this new kit.

The snakeskin pattern is an ode to the coiled grass snake, or Biscione, an important historical symbol for the city of Milan and for the club. The kit marks the first time in a decade that the club’s home kit references the serpent.

Debuted in April 2021, the club’s crest appears on the left chest, and, indirectly, beneath the Scudetto on the center chest.

The kits are constructed with at least 95% recycled plastic bottles as part of Nike’s Move to Zero initiative.

The Nike Inter Milan 2021-2022 home shirt combines the main colors ‘Blue Spark’ & ‘Black’ with ‘Truly Gold’ for logos. Despite the fact that the redesign introduced a new color palette, these colors are the same as those used in the 2020-21 season.

It’s a predominantly blue design with various shades of the color (including also some black) appearing in the form of a snakeskin pattern on the front instead of traditional black and blue stripes. The same snakeskin pattern was first seen on the leaked anthem jacket.

Based on Nike’s new template, the Inter 2021-2022 home shirt has a v-collar, which is black to match the style of the sleeve cuffs. Meanwhile, the Nike and Inter logos are gold. The text Inter Milano appears on the inside collar.

The Inter 21-22 home kit is completed with black shorts and socks.

Continuing on with the snake theme, the away kit takes inspiration from the club’s 2010/2011 away kit, which also featured an eye catching snake pattern, albeit on the side instead of slithering all over the kit.

I have to say that I’m less of a fan of this, which does give me throwbacks to my childhood days of playing Snake on my Nokia phones, and trying to maneuver my “snake” around the screen without bumping into itself. I do like the blue trimmings on the collar and the sleeve which gives a nice contrast to the white base, as compared to the 2010/2011 away kit which had a predominantly white look throughout.

Will the Serie A feel the sting of Simone Inzaghi’s Inter Milan team in the upcoming season? Quite possibly so. I can only imagine them winning in style with this home kit

Keeping with the home version’s main theme, the away kit features Inter’s iconic Biscione changing its skin and celebrates the club’s new visual identity. The new away shirt’s design is white with a hand-drawn black-and-blue serpent running from front to back, with white shorts and socks completing the new kit for the Serie A champions.

Like the home kit, the away shirt bears Socios.com – Inter’s new Global Main Jersey Partner – on the front, while on the reverse is Global Technology Partner Lenovo, the evolution of a successful partnership which goes back to 2019. Yeah there’s no more Pirelli, but with kit designs this sharp that’ll begin to be forgotten about. The iconic snake design is back and that is absolutely okay with everyone. Another season of beautifully executed Inter Milan kits.

The Inter Milan x Nike partnership is one of the most adventurous combos in world football. Consistently pushing the boundaries of design to deliver fresh jerseys, and the new 2021/22 away shirt is everything that is right about this long standing partnership.