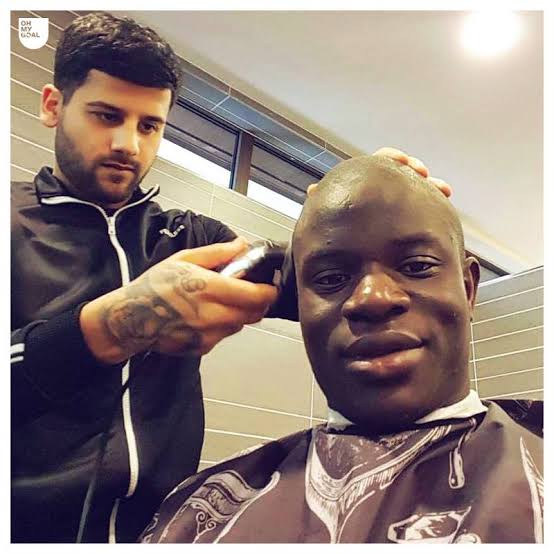 Ngolo Kante took to the saloon to have a haircut and your guess is as good as mine.

He kept it simple, low and as always humble but this time he was keen for the media to have a look as he showed his customary smiles while the barber slowly does his work. Not knowing for flashes and show off The Chelsea midfielder will now look to inspire his teammates to a better result when they take on fulham at the weekend especially now that he has a fresh hair do.

Eden Hazard dazzled in training as Real Madrid prepared for their clash against Atlantic Bibao in the superCOPA semi-finals first leg in Malaga. Eden Hazard looked in the mood in training

The team arrived Malaga and have been training as they bid to go through to the final, and Eden Hazard looked in superb form as he dribbles pass teammates for fun. After returning to winning ways on Sunday abet against an inferior opponent in the FA Cup, few Chelsea players took time to ease off before another hard work commences ahead of weekend clash.

Callum Hudson Odoi who have been in a rich vein of form took a day out as he refreshes himself ahead of what now look like decisive games ahead. Another player who’s form have improved in the last couple of games is Kai Hatvertz, the German criticized heavily by sections of media for below par performance took time off also.

The German is widely known for his love for animals and this time posed with a dog. Kai Hatvertz possed with a dog in a day out

The two attackers will now hope the time out will boost their energy as they return to action this weekend.

Related Topics:Hazard Dazzles in Training and Chelsea Players . See PhotosNgolo Kante Gets Fresh Haircut
Up Next

Latest Transfer: Chelsea on the verge of losing one of the young prospect as Bayern Munich ready to finalize move.

Chelsea transfer Live: Chelsea to Trigger the Release of Halaand to Stamford Bridge and Emerson Palmieri is set to Leave.