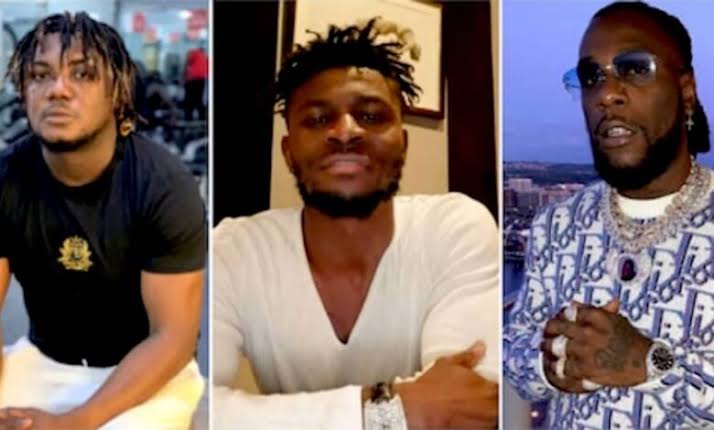 It is obvious that the round leather game is entirely different from music. To gain popularity in football is more easier than that of music.

Therefore, comparing yourself with Nigeria legend Obagoal is a slap on Football world.

CDQ says Burna Boy and his crew should apologise to Obafemi Martins.

See some tweets about Martin’s.

"This was the easiest goal ever." – Obafemi Martins after a late winner as Birmingham beat Arsenal in the 2011 League Cup final pic.twitter.com/vMuf44gJP2 #Obagoal

The music star took to his Twitter page on Monday, March 1, 2021, where he slammed Burna Boy and his crew for their attitude towards the footballer.

“I still can’t phantom this an artist just disrespected Obagoal on thinking he’s now bigger n say e don get mouth pass Obafemi Martins and I imagine how he was able to go back home n sleep comfortably without conscience in this same Lagos igbagbè manshe awa eda ooo,” he tweeted.

Burna for the first time I’m disappointed in u!!!!! U and ur boys need to go apologize to Obagoal now! No let dem dey deceive u wit ur village title say african gi-ant com dey disrespect Oba Eko lonpe bi. Obafemi Martins is not anybody’s mate if we dey cry make we dey see.”

I don’t know what happened between Obagoal and Burna. I don’t know who was right or wrong because I wasn’t there. But last night, I was seeing tweets that Burna is richer and more popular than Obafemi Martins. Lmao this cerelac generation don’t really know who Martins is sha.😂🤣

Like Loading...
Related Topics:Never You Compare Obafemi Martin's With Burns BoyShoe get Sieze. CDQ warns.
Up Next

After Winning Man of the Match against Manchester United, See fans Reactions