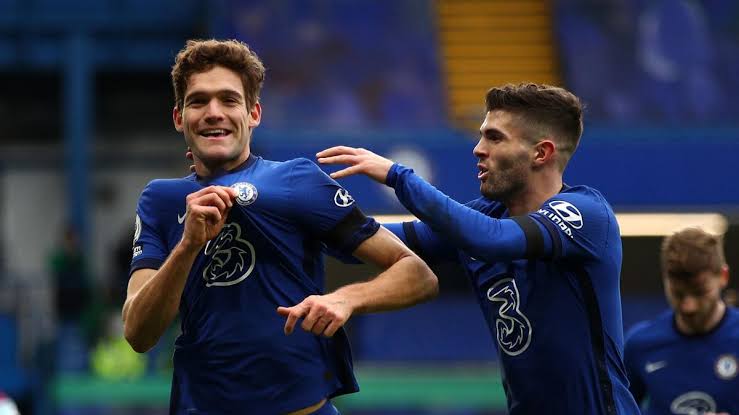 Chelsea has one of the biggest squad in English premier league this season. Thomas Tuchel was able to exploit that advantage against Burnley on Sunday and the outcome was astonishing.

The German Gaffer made four changes in his squad against Burnley – Chilwell, Ziyech, Havertz and Giroud who all started during last game against Wolves were all dropped.

The squad selection delivered the first win of the Thomas Tuchel era, thanks to goals from the Captain Cesar Azpilicueta and Marcos Alonso.

Among all the Players that started today, it was Marcos Alonso that a lot fans were watching out for.

The Spaniard has not only dropped to Chelsea’s third choice Left-back, he has also being casted out by Frank Lampard. He was potentially on his way out the club this January.

He was however handed a rare opportunity under a new manager and he ensured that he made good use of it – He scored a goal.

The reaction of his teammates to his goal showed that they were genuinely happy for his comeback as they made social media posts to celebrate him.

Tammy shared a photo of himself with Alonso and wrote the caption: “So happy for you brother.” Like Loading...
Related Topics:Macus Alonso and Captain Azpilicueta Show Why They Are not PushoversSee Reasons
Up Next

Chelsea news: “Werner As A Striker”-See The Lineup Chelsea Could Use To Destroy Tottenham

Chelsea Latest: The Blues could announce the €70 million signing of €800000-a-month Brazilian player