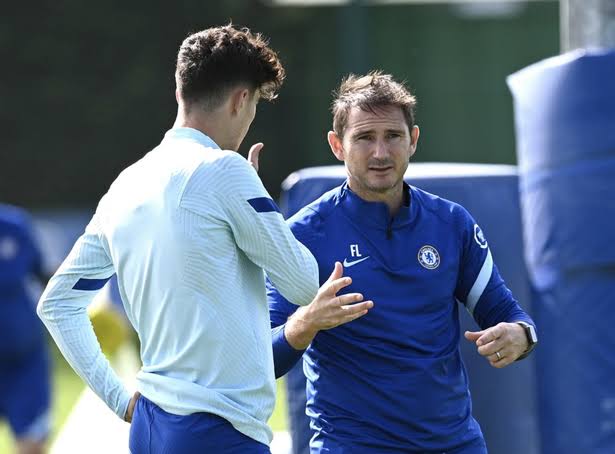 Frank Lampard has been pleading with the Chelsea fans to continue to see young player as their own irrespective of the form they presently are. He said further that player like Kai Havertz and Timo Werner need to be patient with.

Frank Lampard has asked Chelsea FC fans to be patient with Kai Havertz as the German gets used to life at Stamford Bridge.

The Germany international has been settling in at the west London club after having signed for the Blues from Bayer Leverkusen in the summer transfer window.

The 21-year-old has so far scored four goals and made three assists in all competitions for the Blues and he has started nine of Chelsea FC’s 12 games in the Premier League.

Havertz played 68 minutes of Chelsea FC’s disappointing 1-0 loss to Everton in the Premier League on Saturday night as he was unable to prevent the Blues from suffering a defeat at Goodison Park.

The attacker has not scored in any of his last 10 appearances for the Blues, but Lampard is not concerned and says it will take time for the Germany international to fully adapt to the rigours of the Premier League

Speaking after Saturday’s loss to the Toffees, Lampard said: “In the modern day, there’s going to be criticism for every player of every club that loses a game, or if something doesn’t go right.

“We certainly should be patient with Kai Havertz from a Chelsea end because he’s a top-quality talent coming into this league.

“He’s played off the right wing countless times before he signed for Chelsea, he can play in any position across the front and in midfield also so that’s not an issue.

“We do have to be patient, not just with Kai but with any young player, and particularly a young player adjusting to the speed of the Premier League.

“I’ve got no problem with Kai. If people want to jump straight in to criticise, I’d say just wait and give a young player time, whether it’s a week or a month or six months or a year, and come back to me, because I know the player that Kai Havertz is going to be.”

Chelsea FC will return to Premier League action on Tuesday night when they travel to face Wolves at Molineux.

Lampard concluded by appealing to the fans to shreild their criticism on Kai Havertz.

Like Loading...
Related Topics:Lampard begs Chelsea Fans to Remain Resolute and be Patient with Kai Havertz.
Up Next

Chelsea match in Stamford will be without Spectators according to UK Announcement.