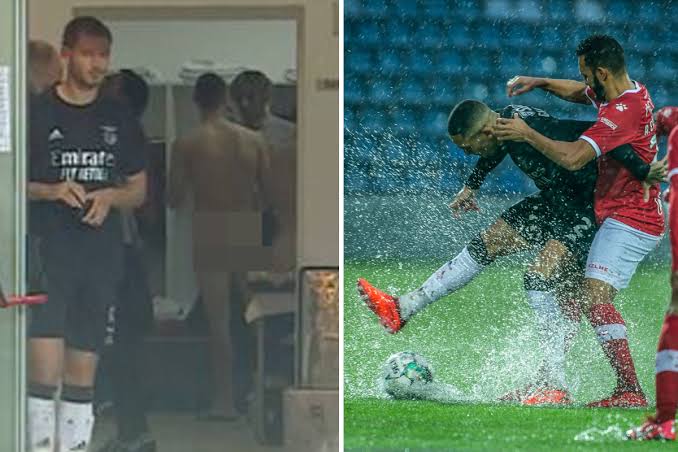 Benfica stars including Jan Vertonghen were caught out by some intrusive television footage on Sunday.

After their Primeira Liga clash against Santa Clara was abandoned due to adverse weather, a camera shot pointing inside the dressing room spotted the backside of an unnamed player who was getting changed.

The match was called off after just six minutes due to a worsening storm, and is due to be restarted on Monday afternoon – but some players could be left annoyed at their recent exposure.

Shortly after the pictures were shown on tv, Portugal legend and Sporting Director Rui Costa stormed onto the pitch with his phone in hand to try and get some answers from those in charge of the broadcast.

Benfica wrote on their official website: “The storm that hit the island of Sao Miguel this Sunday determined the interruption and subsequent decision to postpone the Santa Clara-Benfica match, from round 12 of the Liga NOS.

Benfica go into the rearranged match third in the table with a game in hand over both second-placed Porto and leaders Sporting having won nine of their opening 11 games.

Related Topics:How Benfica Star Caught Naked in the Dressing Room
Up Next