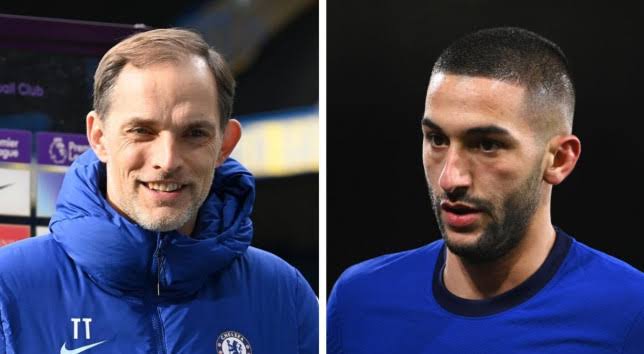 Chelsea summer signing Hakim Ziyech Who’s currently suffering lack of playing time under Manager Thomas Tuchel has been reportedly linked with a move away from the club.

It’s believed that Ziyech wants more playing time and doesn’t like sitting on the bench and the current formation of Tuchel could see him playing less games in the remaining part of the season.

Tuchel’s 3-4-2-1 formation has players who suits it perfectly. The option available for Ziyech is if either Mount and Hudson-Odio are dropped. Mount has been commended as a good player by Tuchel, meaning he will be regular starter. While for Odio, the Youngster has proven this year that he’s the only Chelsea winger in-form. However, the good news for Chelsea that no clubs has submitted a bid concerning Hakim Ziyech’s possible transfer so far according to popular Football journalist in Fabrizio Romano. Tuchel is a man with tactics flexibility. So he might probably be needing Ziyech’s service soon.

Related Topics:Good News as Chelsea new SigningHakim Ziyech may Stay at the Bridge.
Up Next

Mbappe Demonstrates What He Learned from Ronaldo As He Scored Hat-trick Against Barcelona in the UCL.