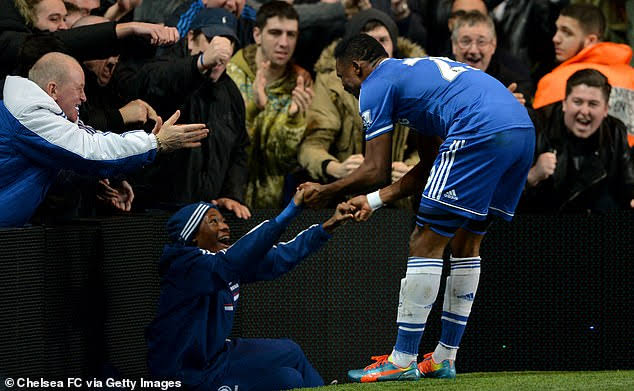 Samuel Eto’o gave Chelsea the lead in the 18th minute of the game as his left-foot shot took a deflection off Michael Carrick leg and looped over David De Gea. Eto’o doubled Chelsea’s lead at the stroke of half-time as Cahill squared the ball for the Cameroonian international who put his effort past David De Gea for the second time in the game. Samuel Eto’o scored his hat-trick in the 49th minute as he turned home a loose ball to give Chelsea a three goal advantage over the Red Devils. Hernandez scored a consolation goal for the Red Devils in the 78th minute as the Blues held on to a 3-1 victory. However, an iconic photo was taken in the game as Samuel Eto’o was pictured celebrating one of his goals with a 13-year-old young ball boy named Callum Hudson-Odoi. Callum Hudson-Odoi who was a ball boy then at Stamford Bridge now plays for Chelsea and he has made 78 appearances in all competitions, scoring 13 goals and registering couple of assists. He made his debut for Chelsea during the 2017/2018 season. The 20-year-old England international has made 17 appearances for Chelsea this season in all competitions and has scored 5 goals so far.

Like Loading...
Related Topics:Celebrated With a Ball BoyEto'o Scored a Hat-trick for Chelsea in 2014Now plays for Chelsea
Up Next

As A True Fans of Chelsea, Ben Chiwell Set Some Interesting Quiz for You