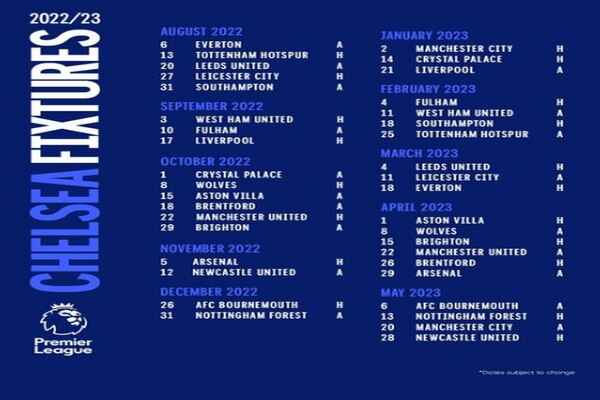 The English Premier League fixtures for the 2022/23 season is finally out and football fans will be entertained with mouthwatering games from the 6th of August 2022 to the 28th of May, 2023. However, Chelsea will kick off their campaign when they travel to bogey ground to face Frank Lampard’s Everton. It’s then Tottenham (H), Leeds (A), Leicester (H) and Southampton (A). Chelsea have lost four in a row away at Everton. The club’s worst such run at any Premier League stadium. The Premier League will take a break in the middle of the season to accommodate the winter World Cup for the first time. Due to this, match-round 16 will be the final one played – over the weekend of November 12/13 – before players called up by their countries for the tournament travel to Qatar.

Like Loading...
Related Topics:EPL Fixtures: Check out Chelsea Full Fixtures Ahead Of Next Season. (Photo)
Up Next