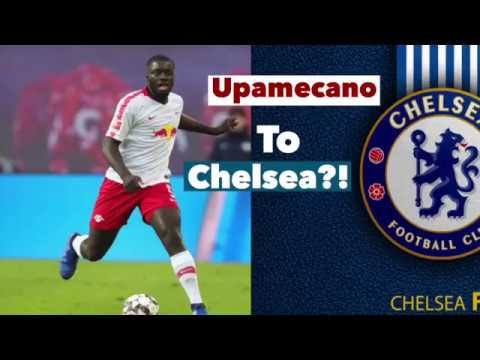 Chelsea manager Frank Lampard is eager to continue his spending spree as he’s aiming to recruit more young and quality players that will enable him challenge for the top 4 position this season. Frank Lampard has identify highly-rated RB Leipzig superstar Dayot Upamecano, as a player that will bolster the team attacking force and also bring strong competition to the team. The 42-years-old Englishman and former Chelsea superstar who’s currently holding the record of the Blues top scorer of all time, is currently under pressure to perform better after spending massively during last summer transfer window. Lampard is keen to bring back glory to his former club despite having a slow stats since he took over the coaching job.

It has been in the news that Frank Lampard has been monitoring the excellent performance of RB Leipzig superstar Dayot Upamecano, due to his excellent performance with the German club. According to thelivesoccer, the west London clubwill enter the race to sign Upamecano in the coming summer. The 22-year-old frenchman penned a new RB Leipzig deal last year which contains an exit clause of around £40m. The 22-years-old France international started his professional football career with RB Salzburg, before he made his way to RB Leipzig back in Jan 13, 2017 and become a crucial figure for the German club.

His impressive performance since he nail down his starting IX spot at the club, has attract a strong interest from the likes of Manchester United, Liverpool, Manchester City, Bayern Munich, Real Madrid and Barcelona. However, Manchester United are said to have cool their interest to sign the young star who has been in the news for long. Dayot Upamecano play mainly as a center-back but he can also play as a defensive-midfielder in some occasions. The highly-rated Frenchman who has become a regular starter for the German club, has feature in 14 appearance and he has scored 1 goal this season.

No doubt, the west London club backline look solid than how it was when Frank Lampard toke over as the manager. But it’s clear that Lampard have more work to do in the backline as they continue to conceive goals in recent weeks. Despite having Brazilian veteran Thiago Silva as a new recruit that came in last summer, Frank is aiming to sign a new center-back that will serve as a possible replacement for the aging Brazilian defender.

Lampard remaining center-halves Kurt Zouma, Fikayo Tomori, Andreas Christensen and Antonio Rudiger, has been in and out of the starting IX spot as they continue to struggle in the club. Dayot will definitely be a regular starter at the club at the club and his outstanding performance will help the manager in the race to challenge for the premier league tittle in few seasons to come.

Related Topics:Chelsea Transfer Update: The Blues Board Could Trigger the Release Clause of This Important Defender.
Up Next

Eden Hazard Back To His Form and Ready to Prove It Tonight.

Chelsea Transfer Live: The Blues on the Verge of Signing Highly Rated Star as Arsenal move for Grealish