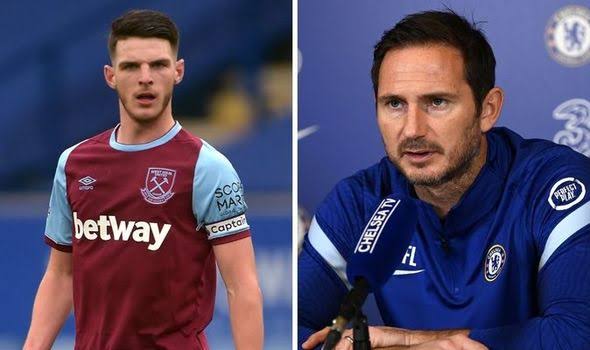 Despite a recent run of poor results, Frank Lampard is set to continue as Chelsea manager and put the team back in contention again. At the moment, the manager will need to make some few signings this January in order to bolster his squad and try to win a silverware this season. According to reports, here is the latest Chelsea transfer news roundup.

Three players to be sold to fund Rice transfer Declan Rice still remains Chelsea top target this January. To get the West Ham midfielder, the Blues have to offload three players first to get funds before tabling an offer. According to a report, three players who the Blues do not really need at the moment and will make available for transfer are Fikayo Tomori, Olivier Giroud and Danny Drinkwater. Another report claims that about four players may be put up for sale. They are Willy Caballero, Marcos Alonso, Tomori and Drinkwater. Chelsea have approached Moises Caicedo’s club as they plan to beat Manchester United in signing the 19-year old. Caicedo is one of the bright youngsters currently monitored by top clubs in Europe, and Chelsea have reportedly made contacts with his club Independiente del Valle.

Caicedo once confessed his admiration for N’Golo Kante and he would like to move to the Stamford Bridge to team up with the Frenchman. Dortmund CEO Hans-Joachim Watzke has given his verdict on Erling Haaland transfer situation. Haaland has been linked with a number of top clubs including Chelsea after impressing for Dortmund since his arrival.

Watzke, however, believes that it is unlikely the Norwegian leaves the German club very soon because he still needs more experience to play for a bigger club. He said that Haaland needs to become a ‘world-class’ in order to play for a top club. Giroud has been linked with a move away from the Stamford Bridge. The French international was reported to have drawn interest from Atletico Madrid in Spain. Juventus are also said to be interested in signing him this transfer window, but a report claims that the striker will continue at Chelsea.

Giroud contract with Chelsea will expire at the end of the season and another one-year extension might be negotiated with him. Bayern Munich defender and Chelsea target David Alaba will become a free agent at the end of the season. The player is now expected to join Real Madrid after the Spanish club offered him a four-year contract of €10 million per year.

That bid is set to overshadow Chelsea’s interest in the 28-year old as it might be the only offer he will consider. Chelsea may be losing out in their pursuit of Strasbourg defender Mohamed Simakan. AC Milan seem to be ahead of the Blues in signing the defender and have already contacted his club.

Strasbourg want about €20 million in total for Simakan and have rejected Milan’s offer of €15 million and €3 million in bonus. This means that Chelsea still have a chance before Milan make another offer. Former Chelsea star Andriy Shevchenko has now been linked as a replacement in case Frank Lampard is sacked. Lampard is yet to get Chelsea to where they ought to be and Shevchenko is being considered by the board as a manager who can help the club.

Shevchenko is currently Ukraine national team coach and will join the likes of Thomas Tuchel, Massimiliano Allegri and Brendan Rodgers as the managers to take over from Lampard. After becoming a free agent, Diego Costa is keen on a move back to the Premier League. Chelsea are not thinking about bringing him back to the Bridge despite his interest in playing in England again. Clubs like Arsenal and Wolves are said to be linked with the striker.

Questions of the day 2) Does it make sense if Chelsea sell players like Giroud, Tomori and Alonso in order to sign Declan Rice?