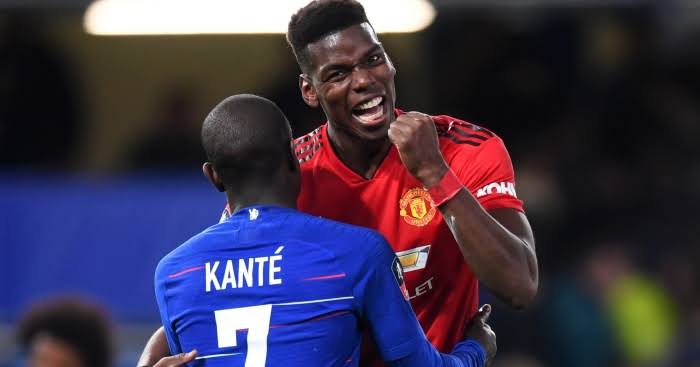 Chelsea ready to take advantage of Paul Pogba rejection of a new deal at Manchester United to sign him as a direct alternative to Declan Rice.

Thomas Tuchel view it that Pogba playing in the Midfied role alongside with Kante will stabilize the Midfied and reguest the Board to sign him.

Chelsea are planning on reshaping their squad ahead of the 2021/22 Premier League season.

It’s no secret that Blues boss Thomas Tuchel is very keen on strengthening his side over the summer, and owner Roman Abramovich is reportedly ready to back him up with transfer funds after securing the club a Champions League trophy in his first six months at Stamford Bridge.

The West London club are been linked with some big names including the likes of West Ham midfielder Declan Rice, Erling Haaland of Borussia Dortmund and Bayern Munich’s Robert Lewandowski. Meanwhile, a report from the Daily Express are suggesting that Manchester United midfielder Paul Pogba has rejected a new £50million contract at Old Trafford, meaning the club have to sell their club-record signing or risk losing him for free in June 2022. Chelsea are in search for a new midfielder after loaning out Billy Gilmour to Norwich, and can finally sign Pogba if they meet Man United £50million asking price for the Frenchman.

The Blues only has N’Golo Kante, Jorginho and Kovacic at their disposal in midfield and there’s a spot for Pogba if he secures a move to Stamford Bridge.

Like Loading...
Related Topics:Chelsea on the Verge of Signing Manchester United Midfieder as an Alternative to Declan Rice After Rejection of New Deal.
Up Next