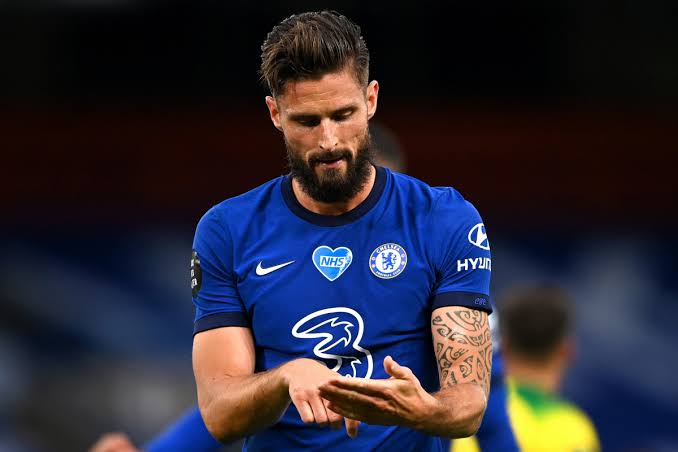 Oliver Giroud Savage a win for the blues in the UEFA Champions league vin France against Stade Rennes and Chelsea fans are demanding a start against the table leader in the premier league, Tottenham Hotspur.

With the present of Giroud I think we will win. Said one of the fans.

In a run of 10 games unbeaten across all competitions, the Blues’ hosts the league leaders Tottenham Hotspur on Sunday evening.

Chelsea will trade tackle with Jose Mourinho side in the Premiership at 17.30 in the Stamford Bridge Stadium in London. Frank Lampard and his men returned to the premier league from international break with an away triumph against the Magpies, Newcastle United at St James’s Park which saw them toped the English premier league table momentarily. Sixth successive win for the Blues’ in 10 games saw them secured a spot in the next round of the UEFA champions league, the round of 16. Goals from Callum Hudson Odoi and a second half substitute Olivier Giroud in stoppage time secured the spot for the Blues’ in last 16 with two games to spare. Jose Mourinho rested 10 out 11 players in his first eleven and play only one and later remove the one player in the 61st minutes in the UEFA Europa league. Sending message to Chelsea that he is going for a win come Sunday.

Tottenham Hotspur thrashed Manchester City 2-0 at home to leapfrog Chelsea and Liverpool and go top of the league with 20 points from 9 games, two points above Chelsea and 1 against Liverpool, who won the epic clash of the weekend at home to Leicester City, beating them by 3 goals to 1 at Anfield. Tottenham thrashed Ludogorets on Thursday night 4-0 at the Tottenham Hotspur stadium in London.

The Blues’ were victorious home and away against the London rivals last season. Winning comfortably 2-0 in both of the premier league fixtures. Going into this game, Chelsea has lost to Spurs this season in the league cup (carabao) in a penalty shootout despite going a goal up for most part of the game. Timo Werner scored his Chelsea goal against Spurs and will be looking to add to his tally and make it 3 goals in 3 games against the North London club. Giroud was the hero for the Blues’ in France, securing a spot for the west London Giants in the UEFA champions league knockout stages, the last 16. Giroud was on target for Chelsea the last time this two titans met in the premier league in July where Chelsea won comfortably 2-0 at the Bridge.

The arrival of Timo Werner and the resurgence of Tammy Abraham and the preference of Frank Lampard for Tammy, saw Giroud dropping down the radars. The 34 year old is reportedly linked with a move away from the Bridge in search of regular game time ahead and in preparation of next Summer’s UEFA Nations League Finals.

Frank Lampard confirmed in his post-match interview at Rennes that the French man continues to give him selection headaches. He stated that he wants the French man to remain at the Bridge for as long as possible. He also said Giroud is a great guy and handles his situation at Chelsea brilliantly and his behaviors in training are fantastic.

Chelsea fans believes that should Oliver Giroud start against Spurs, victory is guaranteed for the hosts.

A fan replied : Giroud Start And We Will Win Easily

Giroud is fantastic and a great guy and we hope he plays for the Blues’ in the London derby come weekend. I hope Chelsea wins. I hope Chelsea tops the premier league table after Gameweek10. Thank you guys!!

See reactions from other fans Below

Related Topics:Chelsea fans react to Oliver Giroud Performance in UCLDemand a start Against Spurs
Up Next

Can Chelsea Target, Erling Haaland Win The Top Scorer In The Champions League.