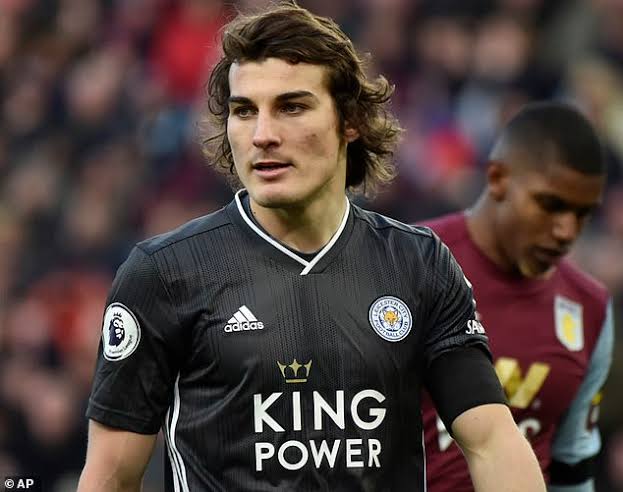 Chelsea Football Club are considering their options as the Blues are set to storm the transfer market again to bring in world-class players to massively improve the overall quality of the squad this season after a bitter loss to Arsenal. According to reports, Chelsea are set to open negotiations to complete the massive signing of highly-rated Leicester city center-back Caglar Soyuncu as the defender has been reportedly identified by Frank Lampard as one of the major transfer target to bring more quality to the backline. Chelsea started the season very brightly but 3-losses in their last 4 Premier League games have seen Chelsea dropped down the table and the latest of those losses was a disappointing 3-1 loss to Arsenal. Chelsea boss Frank Lampard has been reported to be keen on bringing in a world-class Centre-back to improve his defense this seasons and Chelsea now are set to open preliminary negotiations to complete the signing of Leicester City’s Caglar Soyuncu who has been hailed as one of the League’s best defender. 23-Years Old Turkish International and Leicester City star defender Caglar Soyuncu has been regarded as one of the best defenders in the Premier League as his impressive performances for Leicester City in recent seasons has attracted the interest of several top clubs. The likes of Manchester City and even Juventus have been linked with the player but Chelsea are reportedly set to beat the other clubs to the transfer like they did with Ben Chilwell. Chelsea will now look to open talks before the January transfer window starts. Caglar Soyuncu has been reportedly suggested by Petr Cech and Chelsea’s Director Marina Granovskaia as they feel the player has the required quality to improve Chelsea’s defense and also be the long term replacement for Thiago Silva. Caglar Soyuncu is a commanding presence in defense as his ability to control the defense, win aerial duels and also be a leading voice to organize the backline will be a huge boost for Chelsea as they have been seeking a huge defensive leader for a long while now. However, Chelsea will have to pay a fee in the region of £60million to complete the signing of Caglar Soyuncu as the Turkish international defender is highly rated by Leicester City and Chelsea will need a fork out another huge transfer fee to complete the deal. Although, the addition to Caglar Soyuncu to Chelsea’s backline will be a huge boost for the Blues as his presence will be a massive upsurge in defensive quality for the Blues and this will be key for Chelsea if they are to compete with the likes of Manchester City and Liverpool for trophies. Chelsea have started well and it has seemed like the blues need to bring in more quality players to reach the level with they want to attain as Frank Lampard isn’t a huge fan of the likes of Antonio Rudiger and Andreas Christensen. Chelsea will reportedly start talks soon but it remains to be seen if Frank Lampard will get the man in the January transfer window of the Blues boss will have to wait till the summer to get the world-class defender.

Related Topics:Chelsea Director Marina Granovskaia sets to sign a defender from a Premiership side in January.
Up Next