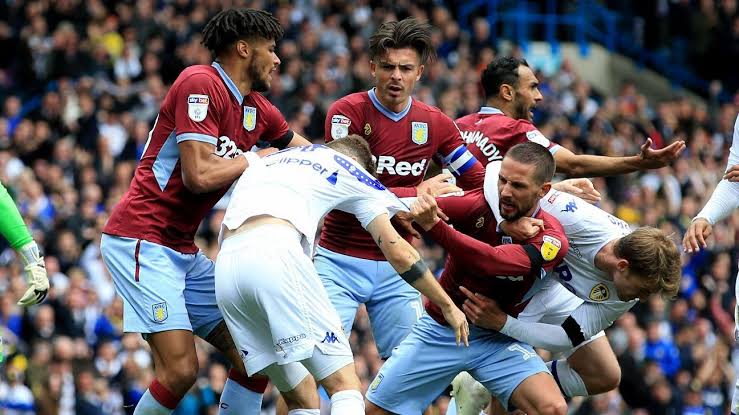 The match has reached half-time.

40′ Ollie Watkins (Aston Villa) dribbles into space and finds himself in a shooting position, but his shot from the edge of the box is bravely blocked.

40′ Raphinha (Leeds) launches the ball from the resulting corner, but one of the defenders is first to the ball and deals with the threat.

40′ Helder Costa (Leeds) wins the ball after the corner kick and takes a shot from the edge of the box, but it’s blocked by one of the defending players. The referee and his assistant both point at the corner flag. Leeds will have an opportunity to threaten the opposition’s goal.

36′ Raphinha (Leeds) swings a cross into the box, but it’s far too close to Emiliano Martinez, who smothers the ball.

34′ A long pass finds Luke Ayling (Leeds) unmarked, he looks up and hits a weak shot from mid-range which drifts well wide of the left post. The ball goes out of play and Aston Villa will have a goal kick.

34′ Tyler Roberts (Leeds) sends a long crossfield pass searching out one of his teammates, but his effort comes to nothing and they lose possession.

28′ Raphinha (Leeds) breaks past challenges inside the box, but puts too much pace on

heads from the edge of the box towards the underside of the crossbar. It lacks accuracy, however, and the goalkeeper makes an easy save.

23′ Raphinha (Leeds) looks like he will be the one to take the corner kick.

22′ Raphinha (Leeds) tries to pass the ball into the penalty area but it’s blocked. The referee blows his whistle, Leeds are awarded a corner kick.

20′ Stuart Dallas (Leeds) unleashes a superb first-time shot from the edge of the box, but it flies narrowly wide of the left post. The ball goes out of play and Aston Villa will have a goal kick.

19’bAnwar El-Ghazi (Aston Villa) is having a lively performance. He is causing problems and wanting the ball at every opportunity.

18′ Anwar El-Ghazi (Aston Villa) receives a low pass just outside the box and unleashes a fine strike towards the bottom right corner. Illan

15′ The corner from Anwar El-Ghazi (Aston Villa) is intercepted by the defence.

15′ Anwar El-Ghazi (Aston Villa) whips in the corner, but one of the defending players gets a head on it and intercepts. The referee points to the corner flag and Aston Villa will take a corner.

14′ Anwar El-Ghazi (Aston Villa) latches on to an accurate pass on the edge of the box and unleashes a strong shot towards the roof of the net, but his effort is denied by the well positioned keeper with a stunning save. The referee points to the corner flag. It’s a corner to Aston Villa.

13′ Jacob Ramsey (Aston Villa) is unable to feed an accurate cross into the box.

12′ Helder Costa (Leeds) trips an opponent with a slide tackle. Peter Bankes stops the game and he could give him a card, but eventually decides on just a warning.

11’bTyler Roberts (Leeds) blew a promising chance when he got to a rebound just outside the penalty area. He struck it towards the middle of the target, but Emiliano Martinez pulled off a nice save to stop the attempt.

10’bThe defence had a hard time blocking out the strike from Raphinha (Leeds). He didn’t hesitate and finished from outside the box right after he had received a pass from his teammate.

5′ It’s a goal! Anwar El-Ghazi (Aston Villa) scores with a brilliant low shot into the middle of the goal after being released inside the box by a superb lofted pass

Like Loading...
Related Topics:Check out the Live Scores Between Leeds and Aston Villa at Halftime.
Up Next

Check Out the EPL Table and Week 6 Results.