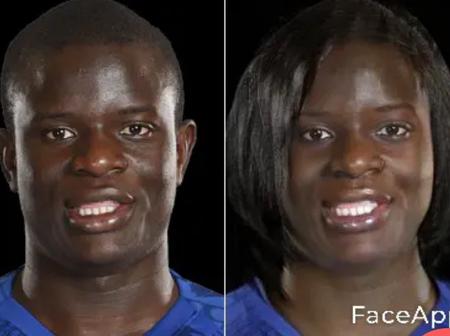 The FaceApp application can be used for different purposes, you canuse it to project how you are going to look when you grow old, or you can use it to project how you’re going to look like if you were a lady. Here is how N’golo Kante, Kurt Zouma, Jorginho, Olivier Giroud, Timo Werner, Kai Havertz, Christian Pulisic, Mateo Kovacic, Mason Mount and Billy Gilmour would look like if they were females.

Kante looks beautiful in his female version, he has good light skin and dark hair. Jorginho looks so beautiful with his female looks, though his male version is very much better. Pulisic looks averagely beautiful in his female version, though some of male features are clearly visible. Very beautiful blonde look for Olivier Giroud, though he’s much better in his original male version. The female version fits Kai Havertz to a large extent as he looks beautiful, but still has some male features. Timo Werner looks Russian in his female version with the long blonde hair. Like Loading...
Related Topics:Check Out the FACEAPP of These Chelsea Players If They Are Female
Up Next

Chelsea Latest: Roman Abramovich asked Board to Delibrate on Lampard Performance, Name Tuchel and others as potential Replacement.

Michael Ballack arises Chelsea on what to do with Kai Havertz