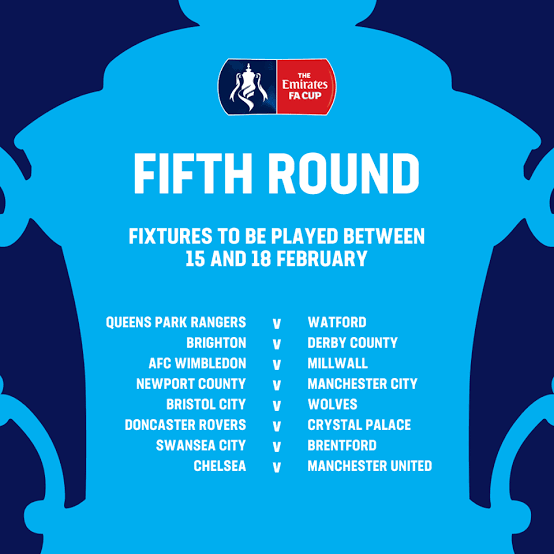 The Emirates FA Cup will make a return on Tuesday, February 9th with 5th round ties to decide who makes it to the next stage of the competition. Two matches will get the fixtures started on Tuesday, while four games will hold the next day, and the remaining two matches will be played on Thursday.

Burnley will host Bournemouth to get the actions underway on Tuesday evening in the first game of the day at Turf Moor Stadium.

Manchester United will lock horns with West Ham United at Old Trafford in the last game of the day on Tuesday night.

Swansea City will entertain Manchester City to get the fixtures started on Wednesday at Liberty Stadium in the first game of the day.

Leicester City will confront Brighton & Hove Albion at the King Power Stadium in the evening kick-off game of the day.

Sheffield United will lock horns with Bristol City in the other evening kick-off game of the day at Bramall Land Stadium.

Everton will trade tackles with Tottenham Hotspur in the last game of the day on Wednesday night at Goodison Park.

Wolverhampton Wanderers will host Southampton to get the actions underway on Thursday at Molineux Stadium in the first game of the day on Thursday evening.

Barnsley will welcome Chelsea to Oakwell Stadium in the last game of the day on Thursday night. The battle for the Emirates FA Cup glory gets underway this midweek with the interesting fixtures to watch out for. Which of these teams do you think will make it to the next round of the competition?

Related Topics:Check out the Emirates FA Cup Fixtures For TuesdayWednesday and Thursday .
Up Next

After Chelsea Manager Tuchel wins Over Sheffield United, See Chelsea’s next Ten Games in the EPL.