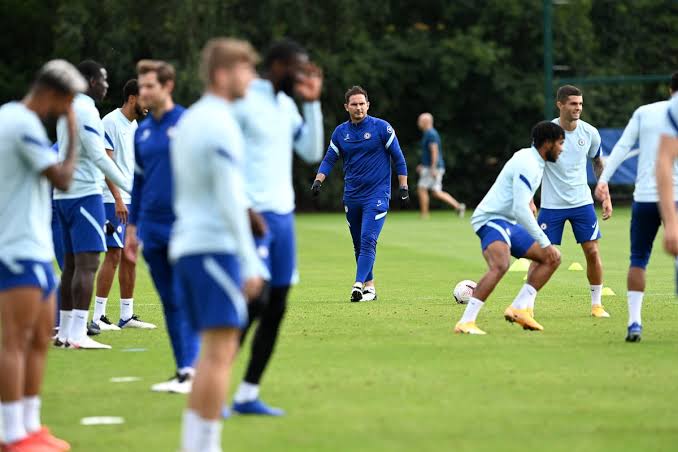 Chelsea Stars arrived at the Cobham training ground on Monday the same way they used to be but not with the same coaching tutor. The Blue’s first training session which was earlier scheduled to hold on Monday morning was rescheduled as the club’s management sent a message to all the players not to attend the morning training session as the management is about to make a statement on the club’s managerial role.

A few hours later, they released a statement that stated that the club has parted ways with Frank Lampard, and after that, the training was scheduled to take place on Monday.

The players however later converged at the Cobham training to focus on Wednesday’s English Premier League game against Wolverhampton Wanderers coming up at Stamford Bridge.

Joe Edwards who was a member of Frank Lampard’s backroom staff was in charge of the training session on Monday evening, following the sacking of the former boss, Frank Lampard.

Check out the training photos below; The Blues will on Wednesday host Wolves in an English Premier League midweek fixtures to begin life after Frank Lampard.

Do you think the sacking of Frank Lampard was the right step by Chelsea?

Related Topics:Check out Chelsea Stars in training with Joe Edwards after the Sacking of Lampard
Up Next

After Chelsea sacked frank Lampard, This is what Callum Hudson-Odoi tweeted that got fans Talking.

After Lampard Was Sacked By Chelsea, Roman Abramovich, Chelsea Owner, Give an Emotional Statement About Him.