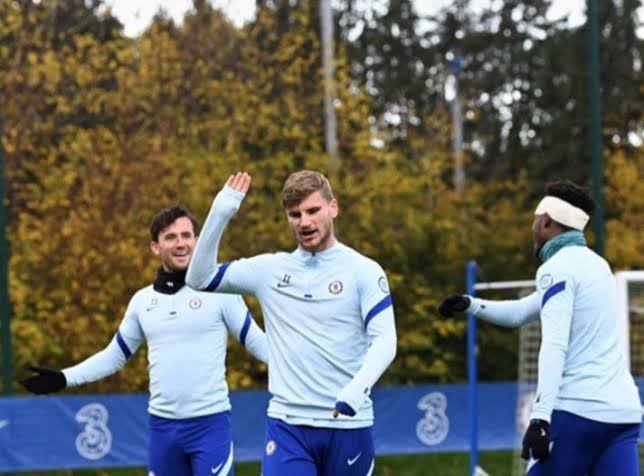 Germany dazzler Timo Werner has reacted after winning the Man of the Match award in Chelsea football Club’s victory over relegation threatening Sheffield United on Sunday night, in the week 23 of the English Premier League at Bramall Lane. The former RassenballSport Leipzig football club of Germany striker started in Chelsea’s attack alongside French national team star Olivier Giroud, and the German was exceptional on the pitch as he played a vital role in Blues two goals scored at Bramall Lane, as Chelsea won their 3rd consecutive matches in the English Premier League under new coach Thomas Tuchel. Werner gave England youngster Mason Mount a beautiful pass that led to Chelsea’s first goal in the first half of the game, and he also won a penalty for his team in the second half of the game, after he was brought down inside the box 18, and Jorginho made no mistake, as he scored to give his team the deserved victory.

Timo Werner was exceptional for the Blues on the pitch before he was replaced by N’golo Kante in the 75th minutes, and his excellent performance made him to win the Man of the Match award after the game. Reacting after winning the Man of the Match award, Timo Werner posted his pictures and his teammates on his verified Instagram handle with the caption of Mason Mount. Timo Werner has failed to score a goal in Chelsea last 14 matches in all competitions, but he has contributed to nothing less than 15 goals for the Blues this season, and he’ll be looking forward to netting his first goal in 15 matches when Chelsea play their next game on Thursday.

Related Topics:After Timo Werner wins the Man of the Match awardSee Ben Chilwell reactions to His Post.
Up Next

Chelsea Manager Tuchel Reveals His Plans for These Players