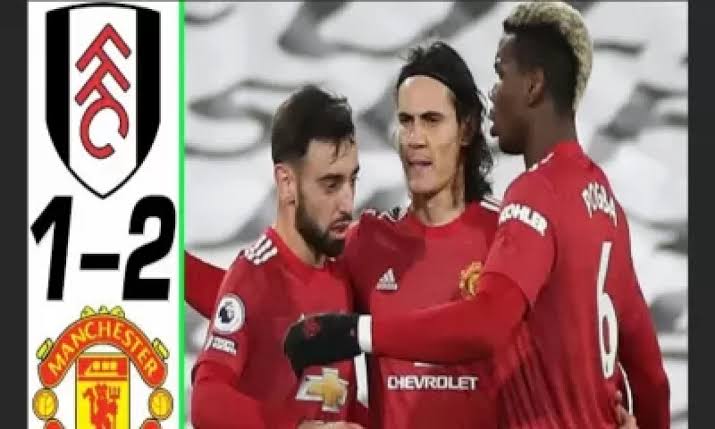 Manchester United continued with their absolute dominance in away games as they defeated Fulham 2-1 at the Carven Cottage Stadium. Summary Of The Game.

Fulham started the first half on a good note as Ademola Lookman gave the host the 1-0 lead in the 5th minute of the match. Manchester United got a nice response as Edinson Cavani capitalised on a poor clearance from Alphonse Areola to give the Red Devils the equaliser in the 21st minute of the game. Manchester United kept pushing for another goal in this encounter but their several attempts couldn’t find the back of the net as the first half concluded in a 1-1 draw courtesy of goals from Ademola Lookman and Edinson Cavani. Manchester United took the lead for the first time in the game as Paul Pogba’s fantastic strike from outside the box gave the Red Devils the 2-1 lead in the 65th minute of the game. Several attacks were thrown by both sides but the scoreline remained the same as Manchester United clinched a slim 2-1 victory over Fulham at the Carven Cottage Stadium thanks to Paul Pogba’s intervention in the 65th minute. Man United currently tops the premier league table with 40 points while Fulham remains at their 18th position with only 12 points to boast of.

If Lampard Gets Sacked, Do You Think These 5 Players will Benefit From A More Experience Coach

After Chelsea Contract A New Coach To Replace Lampard. These are Fans Reactions.