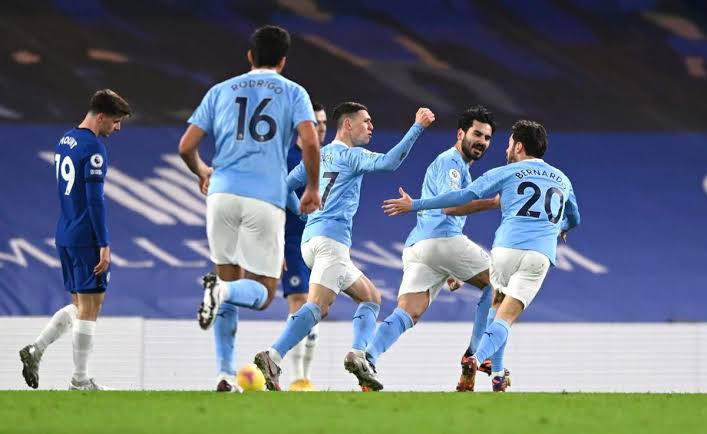 Chelsea were hoping to get back to winning ways against a big team in the English Premier League after a winless game in their last 2 matches. They lost heavily to their London rival Arsenal and then played a one all draw with Aston Villa. Frank Lampard started with a formidable 11 players comprising of Hakim Ziyech, Christian Pulisic And Timo Werner in the attack, while Mason Mount, Ngolo Kante and Kovacic we’re tasked with the responsibility of handling the midfield. Well, the match started well for Chelsea football club but it was Manchester city who broke the deadlock through Gündogan to give Manchester City the lead. It didn’t take long for Manchester City to heap much misery in Chelsea players through Phil Foden. He scored a beautiful goal from a pass through Kevin, making it 2-0. Kevin De Bruyne then made the matters worse for Chelsea football club after Sterling failed to convert a one on one with the Chelsea goal keeper, me scored to make it 3-0 and the 1st half ended like that. Chelsea did try their best to even get a consolation goal because players likes Pulisic, Werner and other players tried their best but it came on the 91st minutes when Mason Mount played a beautiful pass for Hudson who tucked it in to make it 3-1 in favour of Manchester City. This meant that Chelsea did not get any point because the game ended like that, 3-1 in favour of Manchester City.

So, Manchester City moved to 5th position in the league. See the position of others below.

See The Premier League Table Below. Related Topics:After Chelsea Lost to Man City at Stamford BridgeSee Where They Are
Up Next