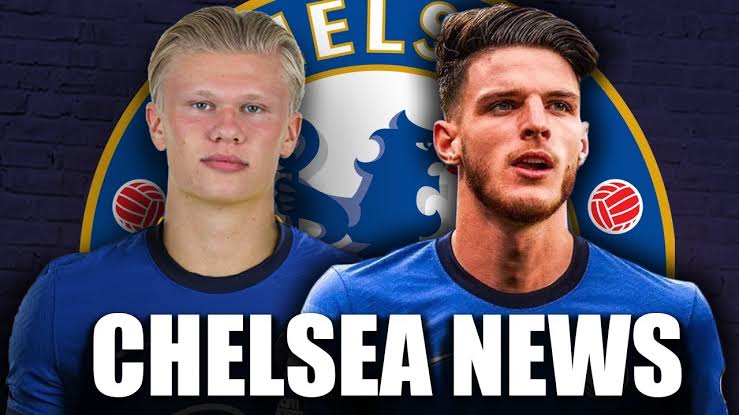 Chelsea Board have seriously showed their interest in signing two important players who will no doubt bolster Frank Lampard’s squad in Challenging for trophies this season, next and still counting. These two world class are amongst Lampard’s top January transfer target. The two players are non other but Dortmund’s Top striker Erling Haaland and West Ham skipper Declan Rice who have already chosen Chelsea as his dream club over Man United. The Blues will no doubt be a serious threat to fellow title contenders like Liverpool, Manchester United, Tottenham and Manchester City if Roman Abramovic and Chelsea transfer Chief could sanction these two deals before the End of January. This Lineup Shows how Lampard will use Erling Haaland and Rice when they arrive at Stamford Bridge. Mendy at the goal line. Chilwell, Thiago Silver, Zouma and James are spotted at the defense. Declan Rice who has been very good at the Defensive Midfield this season for West Ham will obviously occupy the same position in Chelsea Lineup. Havertz and Kante are also spotted at the Midfield position. Odoi is seen at the left wing, while Ziyech is seen at right with. A reliable forward in person of Erling Haaland guarantees goals. FA Cup Draws for Fourth and Fifth Round is Released.

Former Chelsea Handler send Message to Abramovich and His Chiefs Over Lampard.